Building 65b (building next to Highfield Road), Room1005 (Maritime Lab)

Rome’s Mediterranean Ports Project, hosted by the Archaeology Department, is delighted to announce two visiting speakers on the subject of Roman Maritime Law at the revised date of 8th March 2016 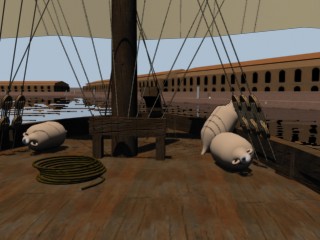 This paper focuses on the historiography of Roman maritime law during the twentieth century. It identifies key assumptions on which past research in this field has been based and argues for a greater integration of the formal (dogmatic) rules of Roman maritime law with contemporary debates concerning trade, commerce and the Roman economy more generally. It also calls for a greater awareness of current debates concerning the role of New Institutional Economics as a method to explain Roman economic behaviour. Finally, it suggests that the legal rules of Roman maritime law should be revisited using a whole-system approach and in light of more recent scholarship concerning the role of custom and the application of Roman law before and after 212 AD.

Roman Law of the Sea or Sea-Law at Rome ? Charter-parties, their clauses and the actio in factum.

Ancient prudentes as well as modern scholarship have created a paradigm of jurisprudential constructionism. In other words, they have attempted to make any situation fit with the frames of legal formalism, i.e. the kind of action opened to the claimer. For that reason, it has paid little attention to an all-purpose form of action: the actio in factum, which included examination of contracts amongst other disputes. Subsequently the importance of non-Roman legal practices and especially the role of contracts in Roman economy may well have been under-estimated.

This paper will focus on chartering contracts in Roman commerce. It will first focus on the specifity of charter-parties, and to how difficult it was for Roman jurisconsults (equivalent of a lawyer), to reduce them to mere locatio rei (navis) or conductio operae faciundae. It will further examine the detail of the clauses of actual contracts revealed by Roman jurisprudence and eventually compare these clauses to actual charter-parties preserved in Egyptian papyri of the imperial period, whose forms vary more than the clauses do.

The research for this project has received funding from the European Research Council under the European Union’s Seventh Framework Programme (FP/2007-2013) / ERC Grant Agreement no. 339123